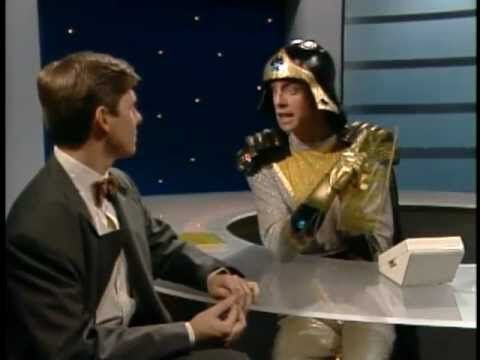 Scott: Whew. Boy, do I need this. Today's just been nuts.

Scott: Yeah, but it never seems to get to you.

Scott: Yeah, you always seem so together. Well, it's like the way you tie your bow tie.

Delphar 7: Really? What do you mean?

Scott: It's so perfect. How do you get it like that?

Delphar 7: Oh, you know, the same way anyone else does, I suppose.

Scott: Yeah? I could never do it. Whenever I do it, it's always a little lopsided, you know?

Delphar 7: Well, it's not like I have any special powers or anything.

Scott: Well, maybe I'm just in awe of how well groomed you are.

Delphar 7: Yeah, well, sure, but it hardly means I'm a member of some super-intelligent race with extremely advanced personal hygiene, does it? [ laughing ] No, I'm just a perfectly normal, mortal human being like anyone else here in the office, right?

Scott: No one said you were an alien.

Kevin: Betty, could you hold all calls, please? Thanks. Well, Delphar 7, would you like some space coffee, some space tea, perhaps? I think we've run out of space sugar, but Betty could hop in the shuttle and get us some in the space store.

Kevin: How was planet Earth?

Kevin: So, is there something you'd like to tell me?

Delphar 7: I can't think of anything.

Delphar 7: Actually, I just got back. I really haven't had the opportunity.

Kevin: Actually, there is a little something in it. I don't know why I'm bothering to bring it up. Which one? Yes, yes, this is it. Word is you destroyed planet Earth. And apparently, this is the 12th one this month. And, well, they're a little worried upstairs. You know those bigwigs. They're wondering if you're cut out for this particular surveillance job. And, oh, oh, when I hired you, I stressed that this was a surveillance job and not a planet-destroying job. Was it my fault? Was it me? Did I not make it clear?

Delphar 7: Have there been complaints about my work, is that it?

Kevin: Uh, no. No, there haven't been any complaints. No. Anyone who might have complained has been blown up. You see the problem?

Delphar 7: Well, I'm not here to win any popularity contests.

Kevin: Oh, you haven't. You haven't. Oh, no, far from it. As a matter of fact, I believe -- yes, yes, you are dead last on my popularity list. I think it's the planet destroying. It isn't going over very, very well with the people upstairs. But I want you to know if you have any personal problems, you talk to me.

Delphar 7: What are you getting at? You think I'm hiding something? I'm not hiding anything from you. I wouldn't hide things from you. I don't know whether you think I'm a double agent from another planet.

Community content is available under CC-BY-SA unless otherwise noted.
Advertisement